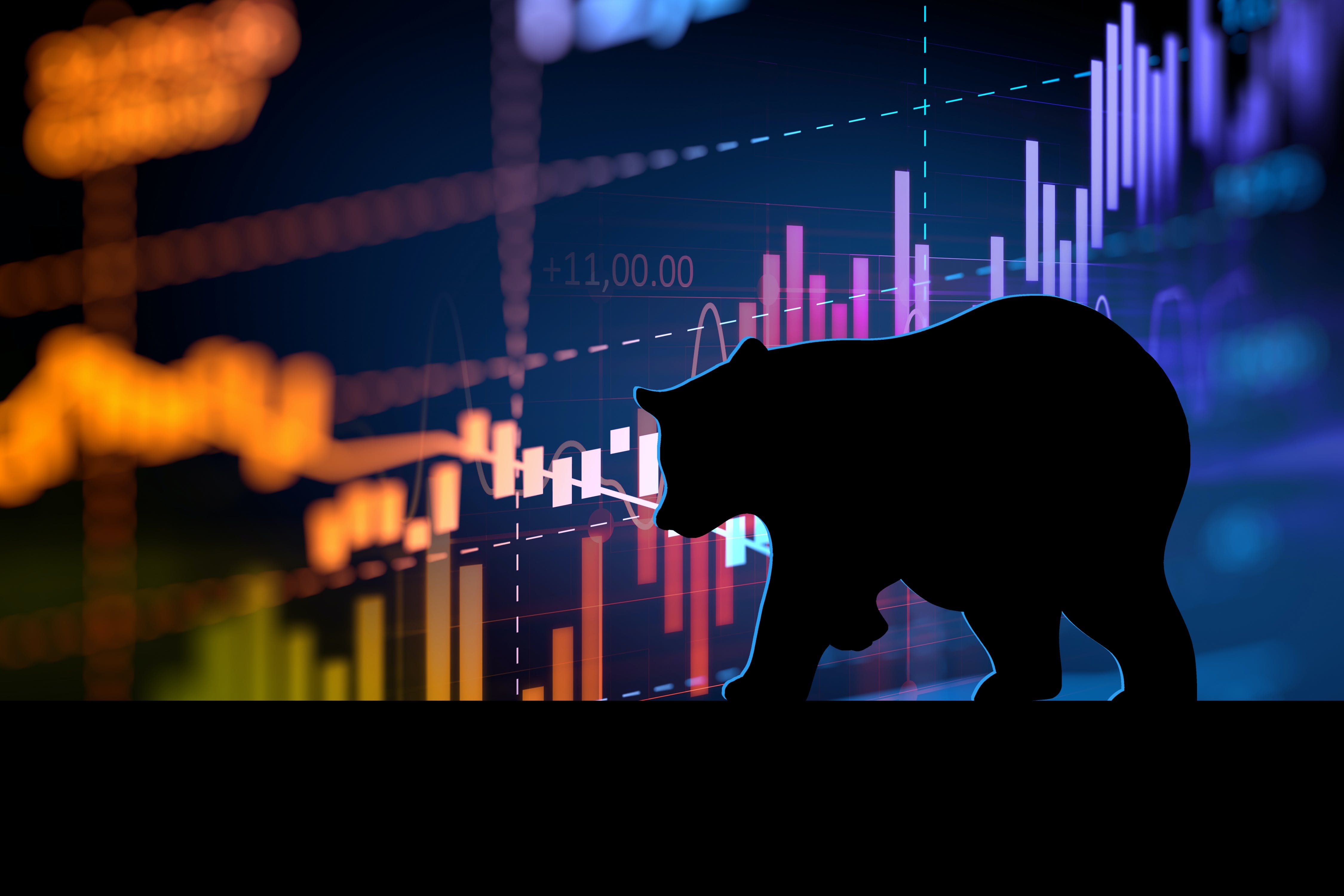 To moderate the fastest inflation in over 40 years, the Federal Reserve has raised the overnight interest rate from 0% to 2.5%, and their own internal forecast calls for a rate of 3.8% by 2023. Chairman Powell and the Board of Governors are trying to walk a tight rope: raise rates enough to moderate inflation, but do it without pushing the economy into a recession. The Fed doesn’t have the best track record of keeping their balance and generating a “soft landing.” In the last nine rate hiking campaigns, the U.S. economy has entered a recession in eight of those.

There is a lot of debate today on whether we’re already in a recession. We have had two consecutive quarters of negative real gross domestic product (GDP) growth.  This isn’t the formal definition of a recession – those are called by the National Bureau of Economic Research (NBER), which looks at more than just GDP changes.  Negative GDP growth does, however, have a very high correlation with recessions, so we would say if we’re not in a recession yet, we’re heading that way.

One thing we can say for certain is we are in a bear market. The Fed hitting the brakes on growth (via higher interest rates) has caused the market to reassess the economy and valuations. The S&P 500 broke the -20% threshold (the formal definition of a bear market) in June, falling -23.6% to its low on June 16 before recovering somewhat through July. Right now, the market remains -11% off its high (as of 8/12/22).

Since we’re in the thick of a bear market, we wanted to provide you some bear market basics – facts and data to help us better understand, and better position, for the pullback.

Bear markets roll around every six years on average. Bear markets are a normal part of investing. Since 1971, there have been 8 bear markets (including the current one), so a bear comes around every six years on average. This doesn’t include the numerous “corrections” (less than -20% pullbacks) that happen on a much more frequent basis. If you plan to be a long-term investor, you can expect to see numerous bear markets in your investing career, so surviving them, not avoiding them, is the name of the game.

The average bear market lasts 14 months (with a wide range of 1 month to 30 months). From its prior peak to the cycle low, most bears last just over one year. The good news – we’re already 7 months into the current downturn (the S&P 500 peaked this cycle on 1/3/22). 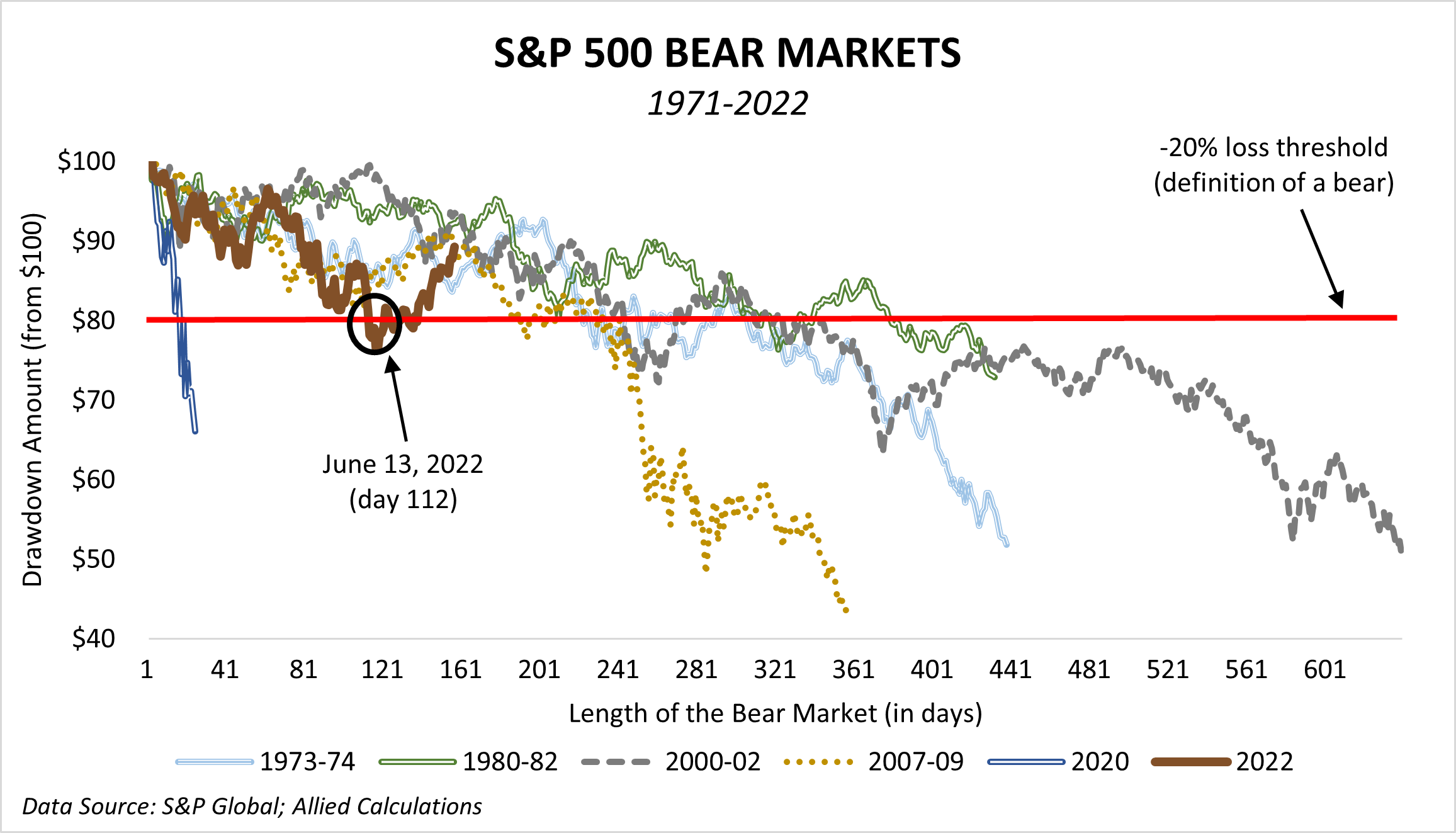 Half the battle is reaching the -20% threshold. Much of a bear market is spent moving from the market high down to the -20% threshold. On average, once we reach the formal definition of a bear market, it’s already 57% over. In this cycle, it took us 112 days to go from the market high on January 3rd to the -20% loss threshold on June 13. So, if you’re searching for good news, you could argue that we’re already more than halfway through this bear (based on the average).

It takes, on average, 29 months to get back to a new high after a bear (range of 5 months to 69 months). From the date of the bear market bottom, it takes an average of 2.4 years to fully recover. Some happen much quicker – the 2020 COVID bear was back to new highs within 5 months, while the 1973 bear market took 69 months to recover (the S&P 500 traded sideways over much of the late 1970s, failing to reach its prior peak until 1980).

One way to lessen the impact of a bear market – the way we focus on at Allied – is to try and be more defensive than the general market. We emphasize higher allocations in defensive sectors like Consumer Staples and Health Care. We also work to find quality companies, ones that can survive and thrive through the full market cycle.

A portfolio that experiences a less severe drawdown is primed to recover quicker when the recovery comes. If the market drops -50%, it means your account needs to gain +100% to fully recover. If, however, you avoid some of the market downturn by holding defensive stocks, and are down -25% (i.e. you experience half of the pullback), your account only needs to grow +33% to be back to breakeven. When executed correctly, this approach can generate substantial long-term outperformance, while at the same time providing a smoother, less volatile ride.

Bonds also provide a nice diversification for accounts during a downturn. With rising rates, it’s been a wild year for bonds (see our May newsletter). Over time, however, bonds can provide stability and consistency to help offset some of the stock market volatility, allowing you to better weather the storm.

It’s no fun to suffer through a bear market, but the contrarian in us does get excited when we see stocks at cheaper valuations and everyone running for the exits. Can the market continue going lower? The table above shows that is a very real possibility. The opportunity to buy high quality companies at better valuations, though, is something we’re actively searching for, looking to position portfolios for the next market upswing. Or, as Warren Buffett likes to say, “Be fearful when others are greedy, and greedy when others are fearful.”

If you have any questions about your account(s), or if there has been a change in your financial situation or investment objectives, please feel free to contact any member of our team at (406) 839-2037 to schedule a meeting.

The views expressed in this newsletter represent the opinion of Allied Investment Advisors, a Registered Investment Adviser. This material is for informational purposes only. It does not constitute investment advice and is not intended as an endorsement of any specific investment or services. The information provided herein is obtained from sources believed to be reliable, but no representation or warranty is made as to its accuracy or completeness. Investing in equity securities involves risks, including the potential loss of principal. While equities may offer the potential for greater long-term growth than most debt securities, they generally have higher volatility. International investments may involve risk of capital loss from unfavorable fluctuation in currency values, from differences in generally accepted accounting principles, or from economic or political instability in other nations. Past performance is not indicative of future results. Investments are not a deposit of or guaranteed by a bank or any bank affiliate. Please notify Allied Investment Advisors if there have been any changes to your financial situation or investment objectives or if you wish to impose or modify any reasonable restrictions on the management of your accounts through Allied Investment Advisors.