Q3 2018: When Risk Management is Warranted 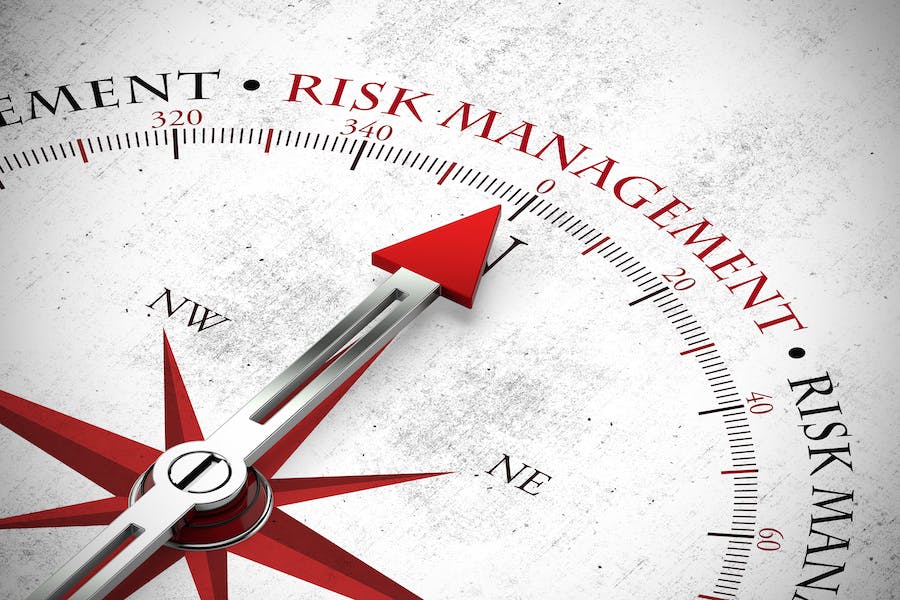 After a sideways first half to the year, the market has started to gain traction in recent weeks, once again challenging the all-time high from late January.

Helping keep the S&P 500 on an upward trajectory is a solid US economy. Second quarter GDP came in at 4.1%, its high­est level since 2014, while Con­sumer Confidence remains near the highest level since 2000.

We are also seeing one of the strongest job markets of the past 50 years. The chart below shows initial jobless claims. The number of people filing new unemployment applica­tions is at the lowest level since 1969. Historically, the economy has never gone into a recession with initial jobless claims hitting new lows. 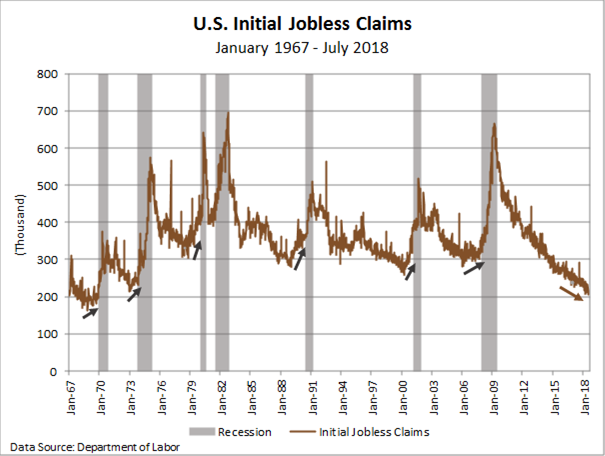 Even with the strong economy, there are still issues to watch. The second quarter GDP gain may have been a pull forward of international trade before tariffs hit, causing growth to slow in coming months. Rising inflation pressures may trigger the Federal Reserve to be overly aggressive in raising in­terest rates, pushing the econ­omy towards a slowdown. And the upcoming midterm elec­tions and geopolitical issues remain wild cards.

Historically, the biggest investing tailwind has been staying the course. In the post-World War II era, the S&P 500 has grown at a compound rate of 7.2% per year (without ac­counting for dividends). There have been great times to buy (Oct. 1974, Mar. 2009) and there have been less attractive times (Mar. 2000), but overall, it has paid to be invested.

In investing, though, you have to be able to survive the journey to make it to the destination. Often, the best way to capture the market’s long-term gains is with a portfolio built for a smoother ride and lower volatility — a strategy focused on valuations, economic trends, and sector weightings.

In past economic cycles, differ­ent sectors have performed better at different stages. The more economically sensitive sectors – like Technology and Consumer Discretionary – have performed well in the early innings of an economic cycle. Industrial stocks often take a while to recover from a downturn, but by the middle of an economic expansion they are hitting their stride. Energy is often even later, waiting for inflation pressures to drive oil and gas prices higher, allowing them to outperform in a late expansion. Finally, Health Care, Consumer Staples, and Utilities all see relative out­performance late in an expan­sion and into a contraction as they provide core services that are required even when times get tough.

As this economic expansion ages, we have lowered our ex­posure to Technology by selling the Vanguard Technol­ogy ETF (VGT) and what we view to be appreciated Industrial and Technology stocks. 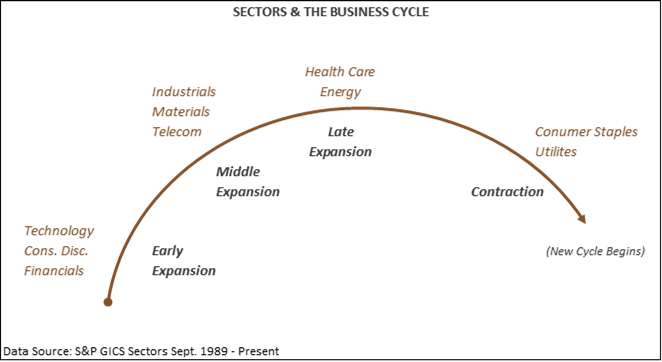 We have been rotating the proceeds from these sales into Health Care and Consumer Staples holdings. Not only do these two sectors historically perform well late in an eco­nomic cycle, but over the past 20 years they have been among the best performing in the S&P 500. Even with a more defensive nature, they have outperformed their more cyclical peers over full market cycles. While we may have been early in this rotation, we view it as a solid risk manage­ment move.

Our goal with these and other adjustments is to take a more conservative stance than the general market. The chart below shows the S&P 500 and a “Risk Manage­ment” approach. The Risk Management approach as­sumes capturing 90% of the S&P 500’s gain in bull markets, and 80% of the downside dur­ing bear markets. This more conservative philosophy (under­performing during the expansion but outperforming during the contraction) would have produced an outperfor­mance of 57 percentage points since 2000, equivalent to an extra $285,000 in profit on a $500,000 investment. Not only has it outperformed, but it has done so with a smoother, less volatile ride. 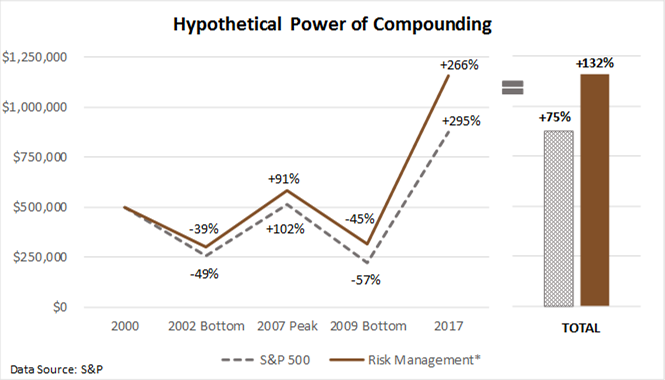 In today’s economic environ­ment, we believe a risk management approach is warranted. The economy looks healthy, with strong growth and low unem­ployment. However, at over 9 years old this bull market is no spring chicken, and rising infla­tion and a tightening Fed are often associated with a late cycle. A more defensive tilt, along with high-quality investments, provides a very conservative stance given the economic evidence.

Disclosure: The charts and performance returns represented are hypothetical because they do not represent the prior performance history of Allied managed accounts. Your actual portfolio may vary significantly from the investments listed above. Hypothetical returns presented within this document are presented as gross-of-fees performance figures and do not reflect the deduction of investment advisory fees or transaction costs, which if applied would reduce the performance returns. Past performance does not guarantee future results. It should not be assumed that account holdings will correspond directly to any such comparative benchmark index. Different types of investments and/or investment strategies involve varying levels of risk, and there can be no assurance that any specific investment or investment strategy (including investment strategies developed by Allied) will be either suitable or profitable for a client's or a prospective client's portfolio and may result in a complete loss of principal. The S&P 500 Index is provided by S&P Dow Jones Indices, a division of S&P Global. You cannot invest directly in an index, which also does not consider trading commissions and costs. 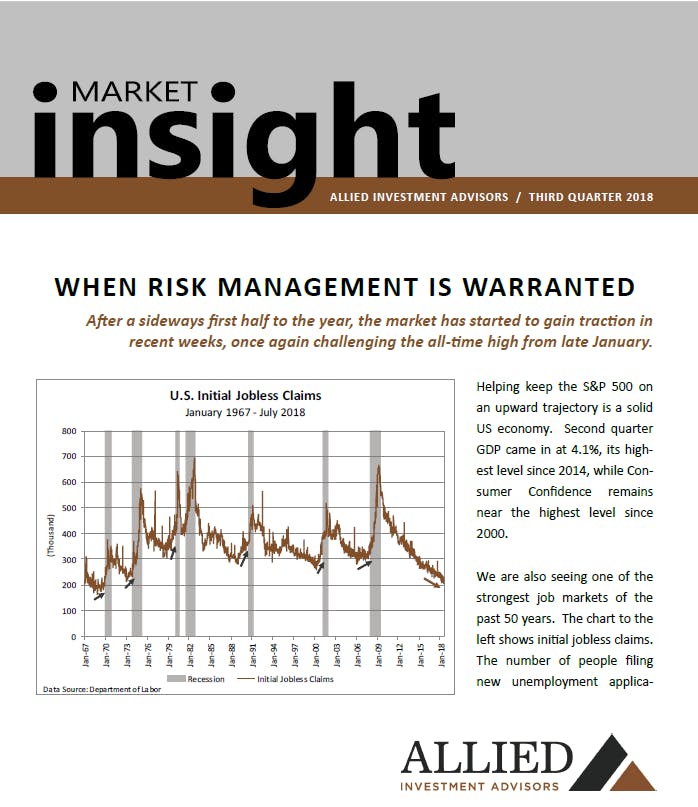